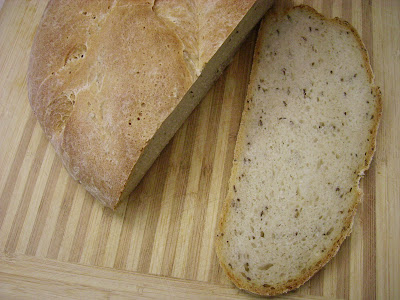 I get a bread baking urge every now and then and I had all the ingredients for Smitten Kitchen's New York Deli Rye Bread.

Inspector Gadget kept freaking out while I was preheating the oven to 450 degrees for 30 minutes. He has an unnatural fascination with the oven and must comment whenever it beeps. Since he doesn't cook, the beeps never involve him, but he is still the first to alert you when the buzzer goes off. It could be a lingering fear from the time he did cook while I was out of town and burnt a pizza to a black crisp. That was the third time the fire department came to our house. Nice. Note, I didn't cause any of the false fire alarms and our automatic smoke detectors are quite sensitive.

And I just saw this roasted tomato soup with broiled cheddar crouton. I know exactly what I'm using the leftover rye for!

Speaking of burning food, I had never heard of Burning Man until one of my favorite bloggers mentioned it earlier in the summer. Once a year, a bunch of artists, inventors and citizens (participants) gather together for a week in the Nevada desert and create a not-for-profit city dedicated to community, art, self-expression and self-reliance. It's kind of deep and spiritual to many, and I find it very interesting. Christina and her husband took quilt blocks and a treadle machine to share with their fellow citizens. If you want to see some background information, there's a documentary titled Burning Man: Beyond Black Rock on Netflix.

Email ThisBlogThis!Share to TwitterShare to FacebookShare to Pinterest
Labels: Food