Never a dull moment around here.

Saturday, Inspector Gadget saw a hawk dive bombing something across the street in our new neighbor's yard. Turned out it was a Green Amazon Parrot. He called me out and we spent 20 minutes trying to scare off the hawk as he swooped down and tried to attack the parrot repeatedly. The crows were up above cheering on the death match. The hawk was not very afraid of us. During one swoop, I was close enough to feel the air move from his wings. Aaack! I hate birds about as much as I hate snakes. And that hawk was huge and relentless. Apparently parrots are a delicacy. 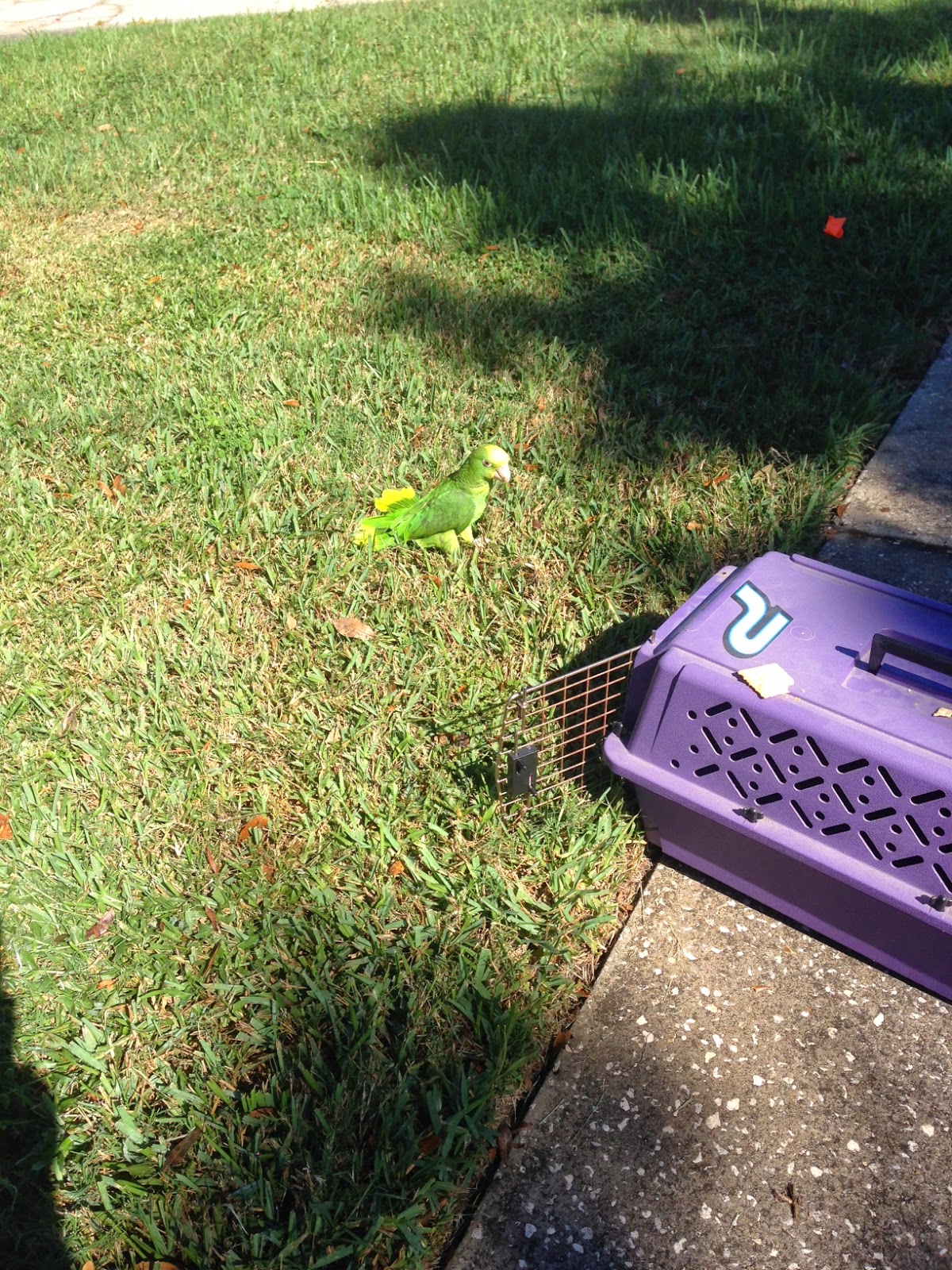 I brought Bones' crate out to see if we could lure the bird inside so the hawk would go away. I brought crackers too, but the parrot didn't seem to be in the mood for a snack. The hawk did get a poke at the poor parrot at some point. Finally, the parrot hopped on the crate and we dragged it across the street to our house. 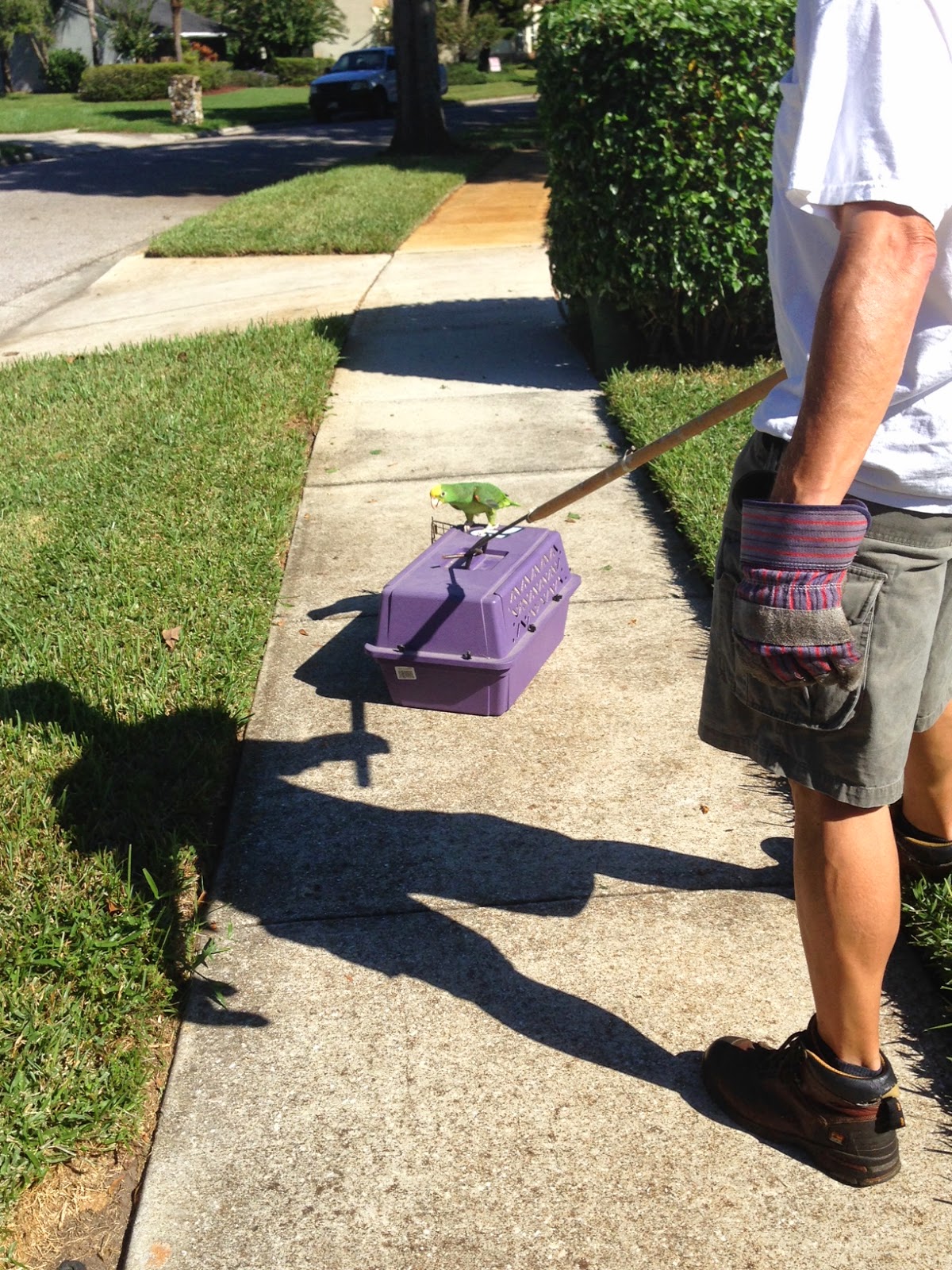 That's the Inspector with his snake stick and crate riding parrot. Note the hawk gloves. I think the Inspector is afraid of birds like I am. I played parrot decoy while we transported birdy to our covered pool deck. 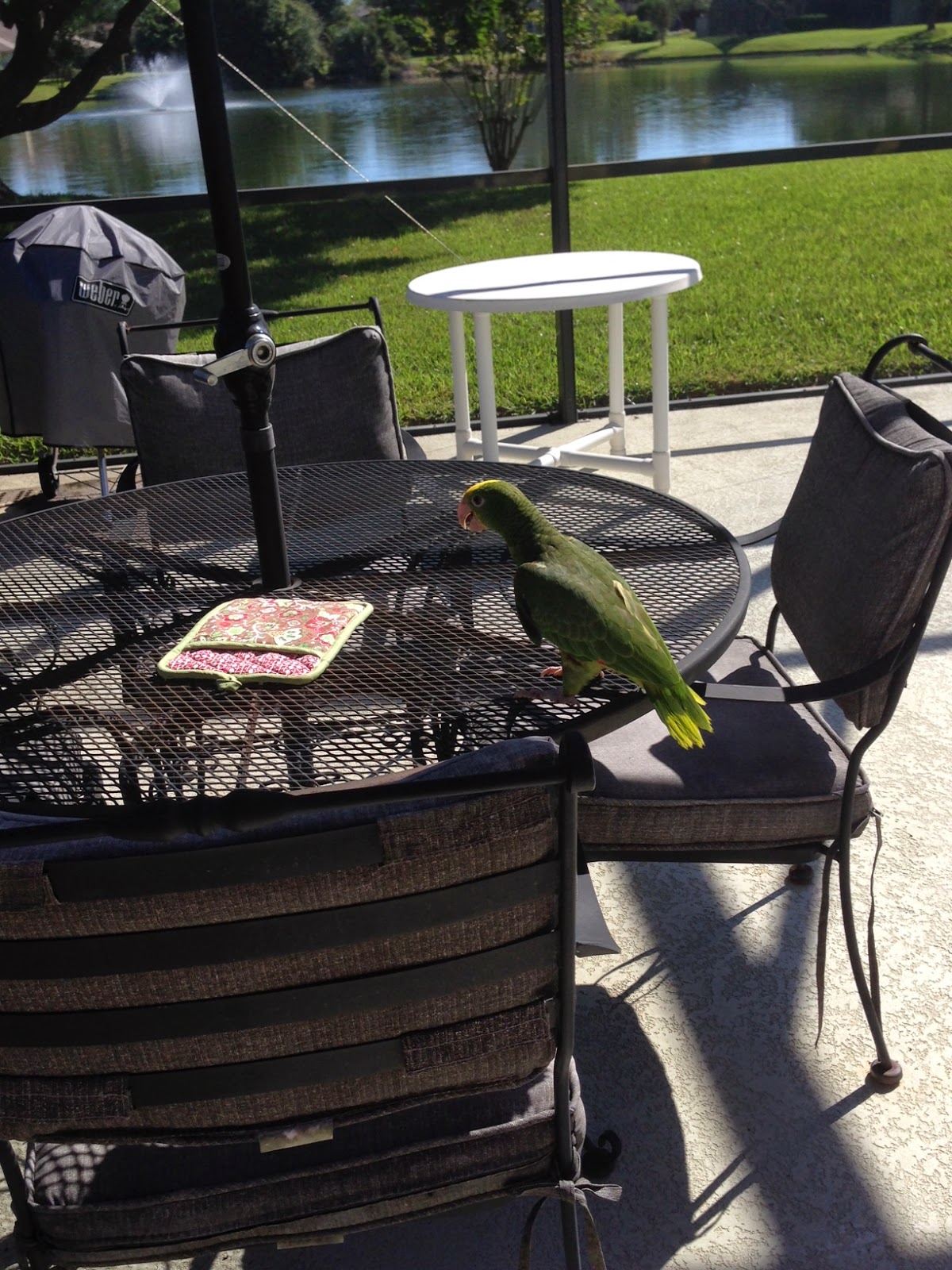 She hung out by the pool until we located her owner (our new neighbor). Apparently, he thought the bird would be fine in this backyard while he ran an errand. Guess he hasn't seen all the birds of prey around here. The parrot is only six months old and says "hello" and "uh oh." Uh oh, is right! It had a gash in its leg, but wasn't bleeding a lot. I think she'll make it.

And then this morning, we're drinking coffee at 6 am and a car alarm goes off. A band of idiot thieves hit our neighborhood and robbed several cars. The Inspector's truck window was smashed and they snatched his GPS before they took off. We ran out just as they were pulling away. I guess our local law enforcement is on the case as these idiots have been making the rounds. We think they left their cell phone in one of the cars they robbed. Dumbos. 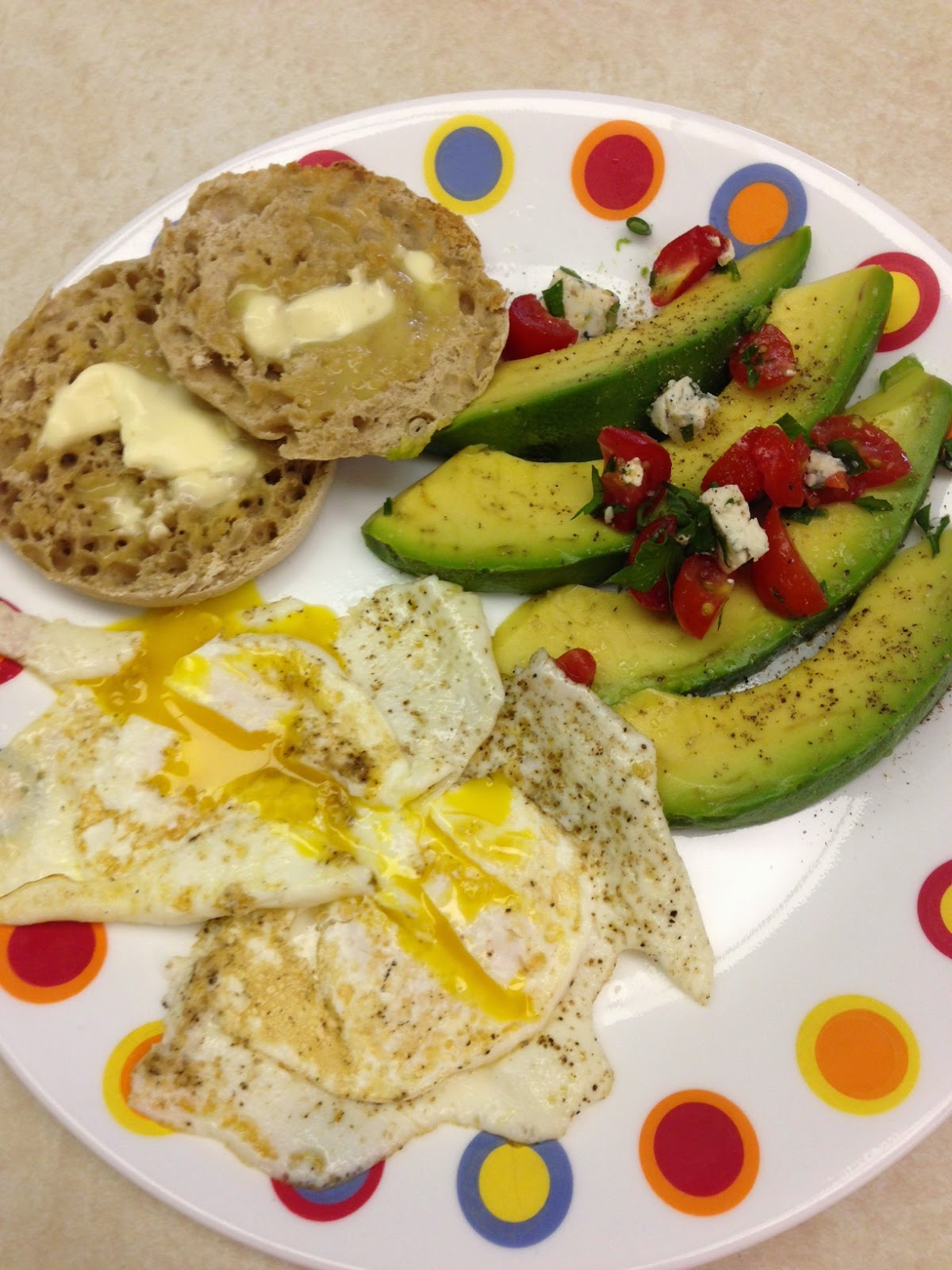 I made the Inspector herbed buttermilk biscuits and sausage gravy after the car break in, but I had a healthier breakfast yesterday. I'm going to continue the sausage theme and try this sausage, squash, and kale soup tonight. Squash and kale aren't big favorites with the peanut gallery, but I'm serving it anyway. I'm also going to try this fraudulent easy sourdough bread recipe. The haters can have ramen if they poo poo my soup. 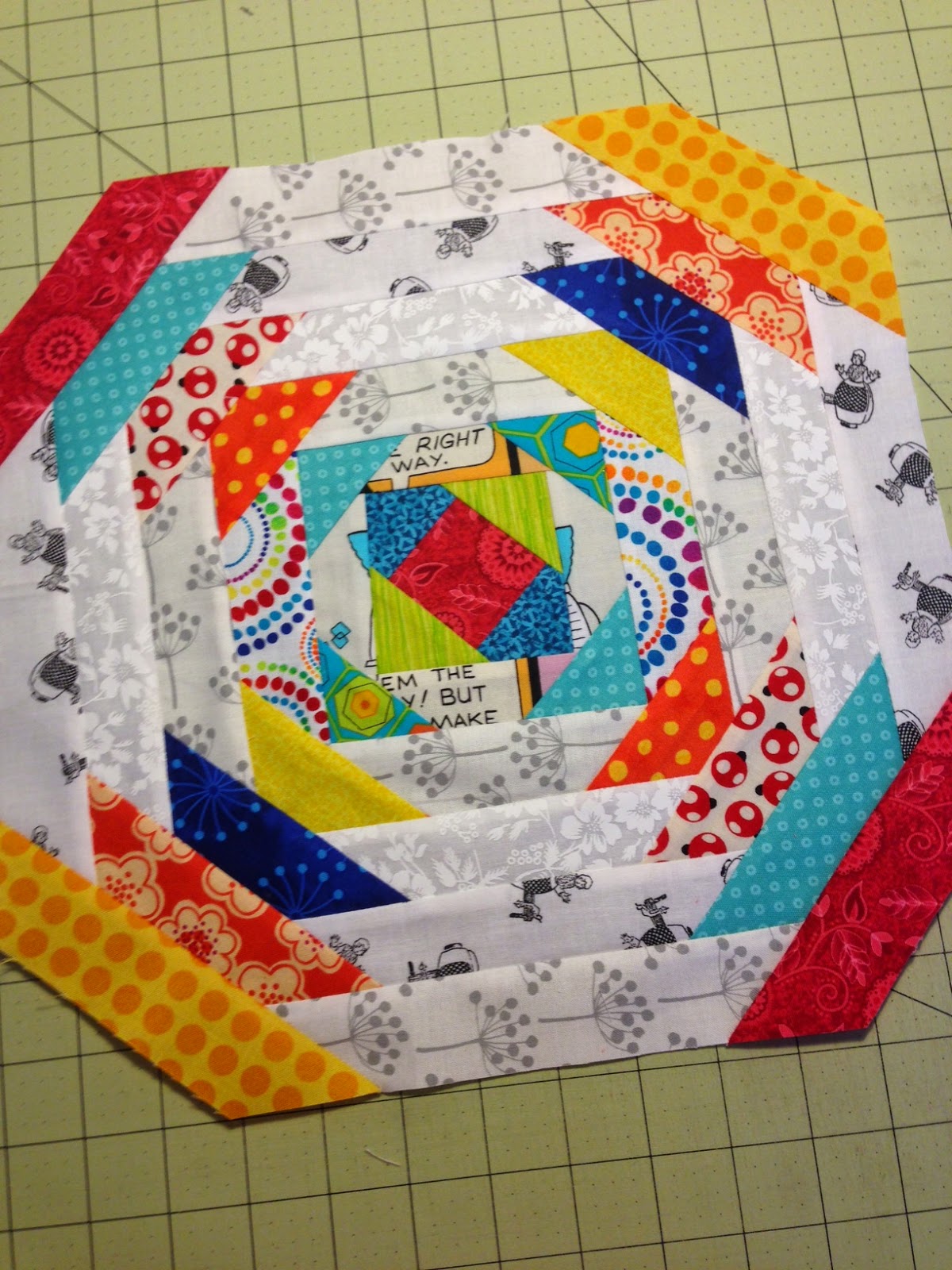 I've been working on a pineapple block using Crazy Mom Quilt's pineapple block tutorial. I'll add a few more rounds to get it to 16" square. Fun and easy! Let's hope the rest of the weekend calms down. Hope yours is going along swimmingly!